In this transaction, Weihai City Commercial Bank offered a total of 877,271,000 shares at the offer price of HK$3.35 per share, which translated to an offering size of US$379 million (prior to the exercise of the over-allotment option).

The Bank was rated as the “National Top 10 City Commercial Bank” for four consecutive years from 2016 to 2019 by Financial News, and it is also the only city commercial bank with outlets covering all prefecture-level cities in Shandong Province, the third largest province in the PRC in terms of GDP. In addition, the Bank ranked third among all city commercial banks headquartered in Shandong Province in terms of total assets, total deposits from customers, and total loans to customers as of December 31, 2019. 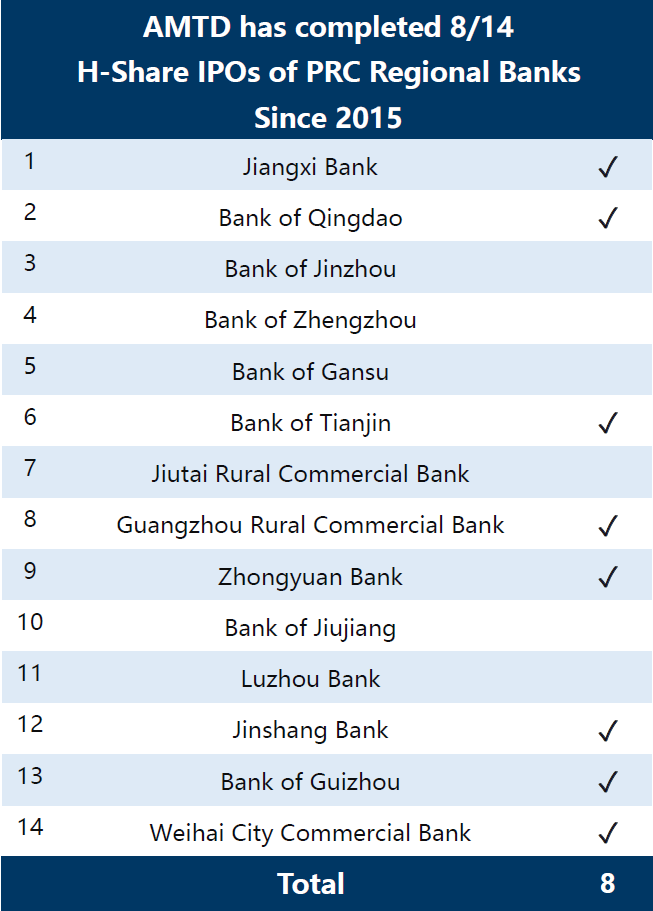 At the same time, with the development of the “Belt and Road Initiative” and the construction of the Guangdong-Hong Kong-Macao Greater Bay Area, more cooperation opportunities are mapped out by strengthening communication and interconnection between Hong Kong and PRC. AMTD plays a prominent role as a bridge connecting Hong Kong capital market with leading PRC regional banks.

In 2018, AMTD, under the witness of HKSAR government, launched the “Regional Banks+ Strategic Cooperation Alliance” together with regional banks including Bank of Qingdao, Zhongyuan Bank, Jiangxi Bank, Guangzhou Rural Commercial Bank. Later on, leading banks such as Airstar Bank and East West Bank were invited into the alliance to further promote the innovation and development in FinTech, smart finance, inclusive finance, and green finance by utilizing various resources, mutual cooperation and collaborative synergy.