Yabuli China Entrepreneurs Forum Summer Summit – “China’s Economy Original Aspiration and Relaunch” was held in Nanchang City of Jiangxi Province from 24th August to 26th August. As an exclusive strategic partner of Yabuli Forum from Hong Kong, Calvin Choi, Chairman & President of AMTD Group, was invited to lead the delegation to support the event in Nanchang. Calvin Choi, Chairman & President of AMTD Group, and Raymond Yung, Vice Chairman of AMTD Global Advisory Committee and Chief Executive Officer of L.R. Capital Group, were invited as speakers to attend the Financial Forum and Internationalization Forum respectively and discussed thoroughly with other guests. Wayne Liu, President Special Assistant of AMTD Group, participated in the talks with well-known Chinese entrepreneurs and discussed the development opportunities with the government leaders from f Jiangxi Province.

Yabuli China Entrepreneurs Forum is the most influential platform in China for entrepreneurs to exchange their thoughts and is regarded as “Eastern Davos”. In this summit, 16 forums were held including Main Forum, Financial Forum, Cultural and Tourism Forum, and Internationalization Forum, etc. The leaders of provincial Party Committee of Jiangxi Province, as well as over 600 famous entrepreneurs nationwide, economists and local and international media were gathered in Nanchang to discuss the original aspiration and relaunch of China’s economy. 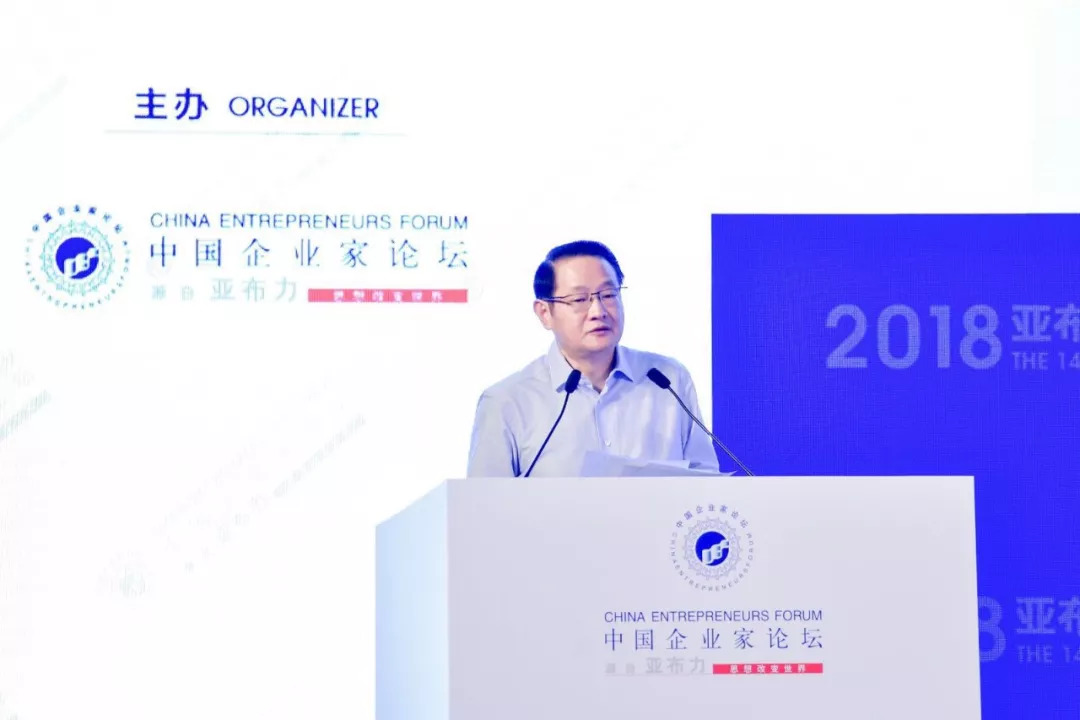 This Summer Summit was held in the old revolutionary base areas in Jiangxi. Given that this year is the 40th anniversary of China’s reform and opening-up, the theme of the Summit was named as China’s Economy Original Aspiration and Relaunch is aimed at discussing the experience and spiritual enhancement of Chinese entrepreneurs in the past 40 years since China’s reform and opening-up policy and forecasting the continual innovative direction of China’s economy. Several reputable guests were invited to deliver speeches during the forum, including Yi Lianhong, Deputy Secretary of provincial Party Committee of Jiangxi and acting governor of the People’s Government of Jiangxi Province; Wu Zhongqiong, Vice Governor of the People’s Government of Jiangxi Province; Liu Mingkang, former honorary Chairman of Yabuli China Entrepreneurs Forum and former Chairman of China Banking Regulatory Commission; Ding Liguo, rotating Chairman of Yabuli China Entrepreneurs Forum and Executive Chairman of Delong Holdings; Tian Yuan, Chairman of Yabuli China Entrepreneurs Forum and Founding partner of Yuanming Capital; Chen Dongsheng, Chairman and CEO of Taikang Insurance Group Inc; Wang Shi, Chairman of Vanke Foundation; Hong Qi, Chairman of China Minsheng Bank; Chen Xiaoming, Chairman of Jiangxi Bank; and Zhang Liping, Chairman of Greater China of Blackstone Group. 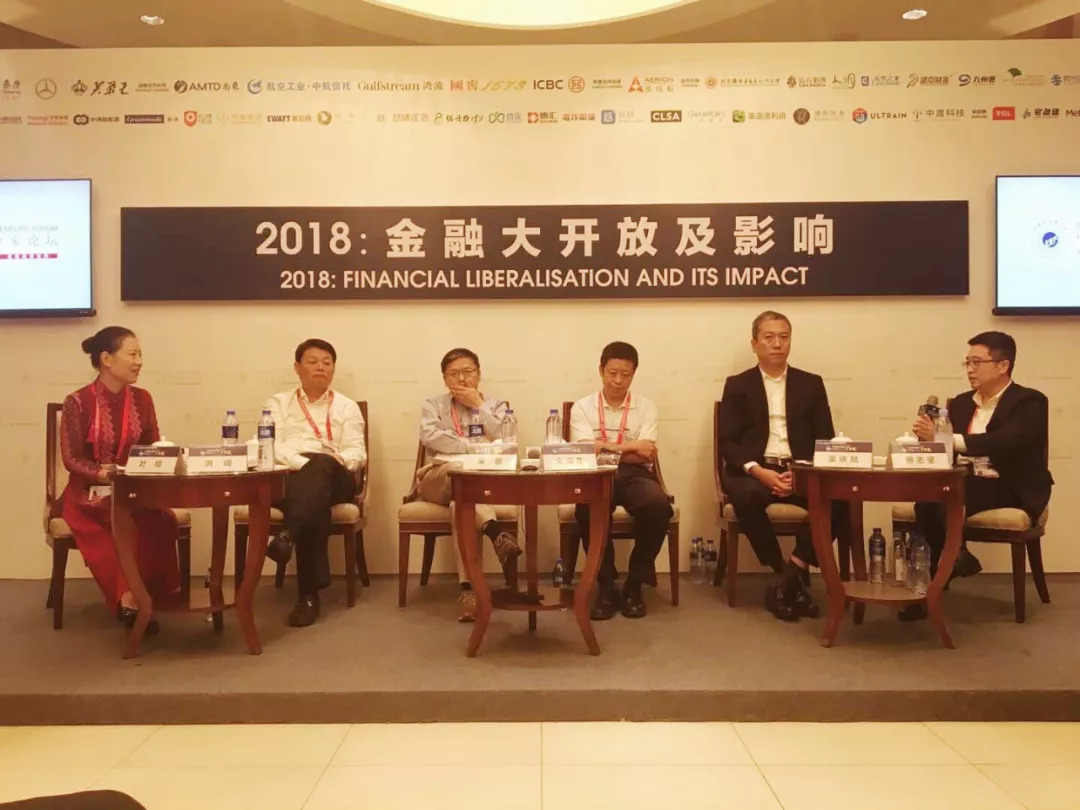 Calvin Choi, Chairman & President of AMTD Group, was invited to attend as a speaker at the Forum “2018: Financial Liberalisation and its Impact”. He discussed the opportunities and challenges brought by financial liberalization with Hong Qi, Chairman of China Minsheng Bank; Song Min, Dean of Economics and Management School of Wuhan University; Jin Hainian, Executive Dean of Institution for Industry of Tsinghua Holdings, and Wu Qingbin, Chairman of Zongtai Trust Co Ltd. The forum was hosted by Ye Tan, a famous financial commentator.

In the speech, Calvin Choi said the opening-up of China has been proceeding with rhythms. Along with the development of China’s reform and opening-up in the past 40 years, the deepening of the execution of “Belt and Road” initiative and the strengthening of “go global” and “attract foreign investments”, Chinese enterprises were built up stronger and the opening-up of financial industry was strengthened as well. When talking about Jiangxi, Calvin Choi said that this year was the year for Jiangxi to embrace opening-up and get more attention from investors. He expected and believed there would be more collaboration opportunities in the future.

Raymond Yung, Vice Chairman of Global Advisory Committee of AMTD Group, Chief Executive Officer of L.R. Capital Group, was invited to attend the forum of “The Capability to Serve the World – The New Internationalisation of China Enterprises” to express his opinion on the advantages and disadvantages of China economy under globalization and how financial services assist China enterprises to transform and upgrade themselves. In his speech, Raymond Yung said there were three important factors which made China enterprises “go global” successfully, including how to achieve synergies, how to manage compliance risks and how to attract talents.

As “Eastern Davos”, Yabuli China Entrepreneurs Forum, provides a platform to facilitate convergence of thoughts between top entrepreneurs and economists and thorough discussions towards potential collaboration opportunities in the future. AMTD Group, as a financial institution rooted in Hong Kong, backed by the motherland and serving the entire globe with global business networks, has aimed to provide services and connect Mainland and Hong Kong with global capital and resources. Along with the deepening of China’s reform and opening-up policy, AMTD actively echoes with the implementation and development of “Belt and Road” and “Greater Bay Area” strategies and fully acts the role as a “super-connector”, which assists Mainland enterprises to connect with international capital markets, facilitates the development of new economy enterprises and supports innovation strategies of the country. In this year, AMTD acted as a Joint Global Coordinator to assist Jiangxi Bank, the only city commercial bank at provincial level in Jiangxi Province, in H-share IPO and successfully list on Hong Kong Stock Exchange, which made the largest IPO of financial industry in 2018, made the first financial IPO in Jiangxi and realized the first entity to list offshore since the implementation of Jiangxi’s “Ying Shan Hong Mission” (映山红行动). Mao Weiming, the Standing Committee of Jiangxi provincial Party committee and Executive Vice Governor of Jiangxi Province, attended the listing ceremony and stroke the gong with Chen Xiaoming, Chairman of Jiangxi Bank, at the opening. 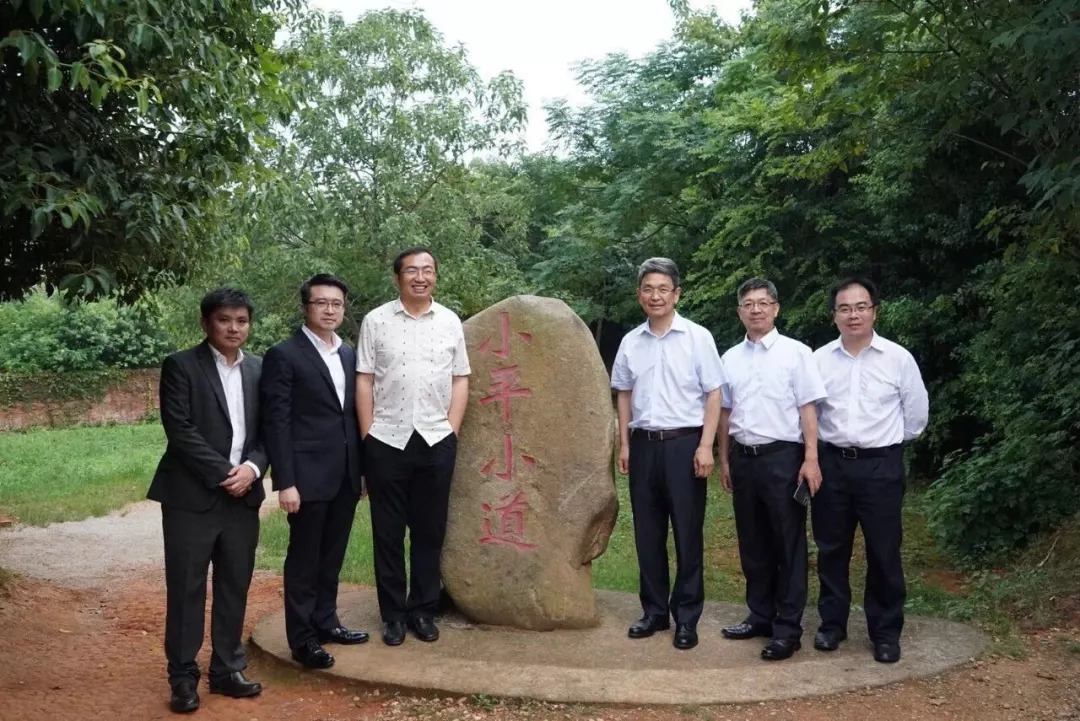 During the event, Calvin Choi was also invited to visit “Xiaoping’s Path” to pursue the footprint of the legend and determine his spirit and faith. “Your mind determines good and bad times, and your responsibility determines important and difficult times” (顺境逆境看襟怀，大事难事看担当), said Calvin Choi. He also said even during tough living environment and spiritual difficulties, Deng Xiaoping remained to stay optimism in mind and care about the future of the country and nation, and eventually he led China to reform and open-up successfully based on the socialism with Chinese characteristics. His demonstration made the best illustration of “Don’t forget the original aspiration and bear your mission in mind” (不忘初心，牢记使命). 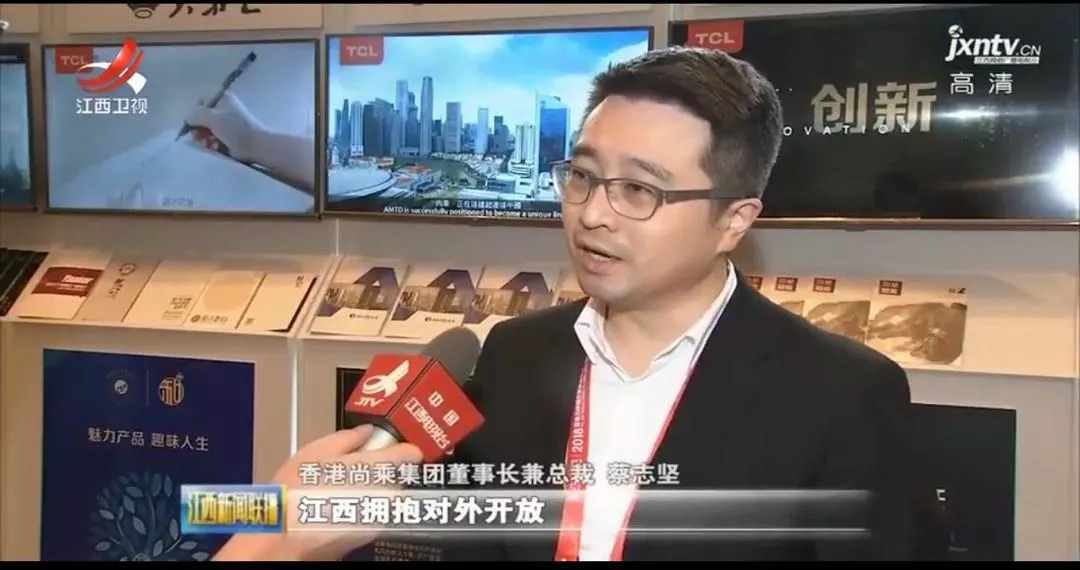 During the Summit, Calvin Choi and Raymond Yung were also interviewed by media such as People’s Daily Online, Jiangxi TV, The Paper, Sina and Yi Cai to share their thoughts and expectations towards China’s reform and opening-up, in which, as a leading financial institution in Hong Kong, they are determined to promote the connections between the Mainland and Hong Kong, promote the development of the Greater Bay Area and promote the further development of reform and opening-up of the country. 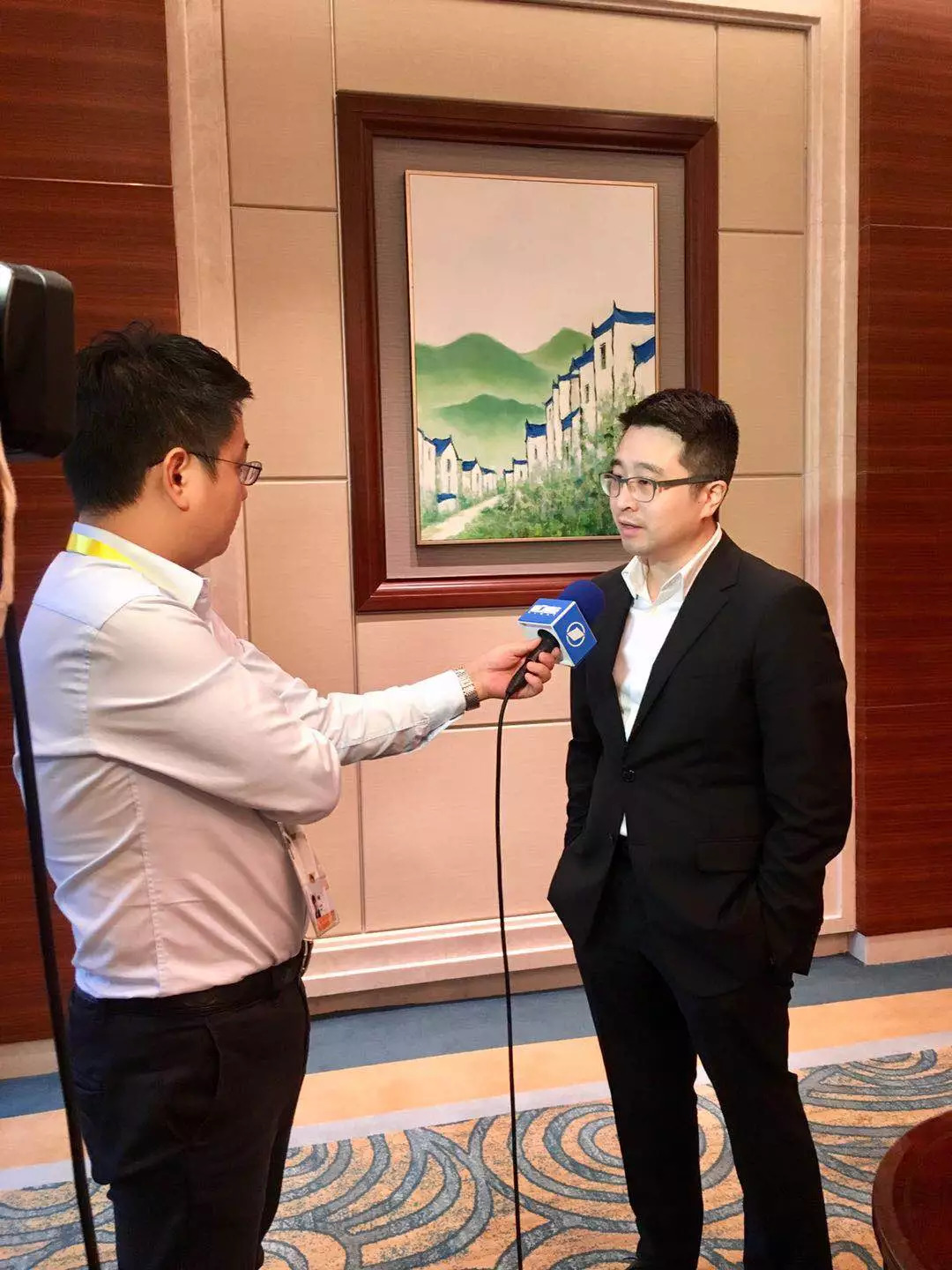